Demand and supply of natural gas

During the first eight months of 2013, the total consumption of natural gas remained very close to last year’s consumption. The sharp rise in the residential and commercial sectors was offset by the drop in the power sector. This winter, however, both of these sectors’ consumption isn’t expected to rise compared to last year.

Based on the updated Energy Information Administration outlook , in the upcoming 2013/2014 winter, natural gas consumption is expected to be close to last year’s : The demand in the residential and commercial will fall by 1%, consumption in the power sector will drop by 3%, and industrial production will increase by 3%.  On the other hand, the supply is projected to rise by 2% compared to last year’s winter. This trend could loosen the natural gas market compared to last year; it may also curb down the recent rally of natural gas.

Before purchasing a natural gas ETF such as United States Natural Gas (NYSEMKT: UNG), consider its main drawback: underperforming the natural gas price due to the Contango in the market. This problem is well explained in detail in an early Fool article. A contango is a situation, in which long term future contracts are priced higher than short term contacts. The UNG ETF mostly holds next month’s future contracts — as of this month, its January’s future contract. Before the contract expires, however, the ETF sells January’s future contract in exchange for February’s contract. If February’s contract is higher than January’s, the market is considered, as stated earlier, in Contango . As a result, the value of the investment in the February contract would tend to increase slower than the spot price of natural gas, or decline faster. In other words, when the market is in Contango, the ETF loses money with respect to the movement in the spot price of natural gas. The Contango is likely to continue in the coming months: This trend tends to occur during winter times, as stated by the UNG prospectus .

Moreover, investing in UNG includes a 0.6% management fee. This is another factor that will further lower the return on such an investment.

The chart below shows the movement of UNG and the price of natural gas normalized to the end of last year. 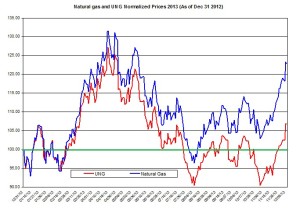 As you can see, the price of natural gas rose by 22% during the year, up to date, while UNG rose by only 6%. Therefore, investors may want to consider alternative investments to UNG such as natural gas producers Chesapeake and Anadarko Petroleum. Let’s review how these companies are doing in the natural gas market.

These two companies are likely to benefit form the rally in natural gas prices in the coming months. They could also serve as alternatively investments to UNG.

The natural gas market is heating up for the winter time, and the sharp rise in prices is likely to continue in the coming weeks. But the current weather forecasts suggest the demand for natural gas won’t sharply rise this winter. This could result in a slowdown in the recent rally of natural gas price. Nonetheless, the ongoing recovery of natural gas is likely to benefit companies such as Chesapeake and Anadarko Petroleum.