The price of oil plunged during April. Will oil prices recover from its recent tumble and rally to the $100 mark? How will the shifts in the price of oil affect leading refinery companies? Let’s examine the recent developments in the oil market to answer these questions.

The plunge in the oil prices coincided with the fall of leading oil companies such as Chevron (NYSE: CVX). During April, shares of this company decreased by nearly 1.1%. The linear correlation between Chevron’s shares and the daily changes in the price of oil reached 0.53 during 2012-2013. This correlation implies (assuming linearity and normality of the relation) that the drop in oil prices could explain nearly 28% of Chevron’s stock volatility. Thus, if oil prices will continue to fall, the value of Chevron will decline (based on DCF valuation). The company released an interim update (opens pdf) regarding its performance in the first two months of 2013. Based on the report, the company’s upstream production seem to have increased compared to the same quarter in 2012. Conversely, the company’s refinery input declined due to maintenance. So it’s still unclear if the company’s output rose or fell. In any case, the drop in oil prices during the first quarter of 2013 is likely to pull back Chevron’s revenues.

Let’s examine the recent changes in oil supply, demand and storage and try to figure what is up ahead for oil.

From the supply standpoint, OPEC’s production slightly declined in recent months; its average production reached 30.2 million barrels per day for the first quarter of 2013. According to the IEA monthly update, the non-OPEC supply is projected to rise by 1.1 mb/d to reach 54.4 mb/d during 2013. The expected rise in production of non-OPEC countries and the stability of OPEC’s production is likely to maintain oil prices at their current level, assuming all things equal.

Moreover, based on the latest EIA weekly update, U.S oil imports rose during April by nearly 1%; as of April 12th, it was still 13.9% lower than the same week in 2012.

The chart below presents the weekly changes in oil imports and prices during 2012 and 2013. As seen, the recent fall in prices coincided with the rise in oil imports. 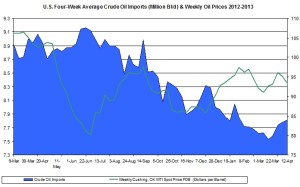 Leading refineries companies such as Marathon Petroleum (NYSE:MPC) and Tesoro (NYSE:TSO) have performed well during most of the year (so far) in the stock market, which coincides with the rise in refinery inputs: shares of Tesoro spiked by 22.2% (year-to-date); Marathon Petroleum’s stock also sharply rose by 29.4%. Nonetheless, these companies’ stocks fell in recent weeks, partly due to the drop in oil prices.

Despite the drop in the price of oil, these companies are still projected to continue growing their revenues in 2013.

Marathon Petroleum bought back in February from BP several assets, including a 450 thousand barrel per day refinery located in Texas. This asset sale (one of several) was made so that BP will be able to payoff its Gulf of Mexico spill fines, clean up and compensations. This transaction will boost Marathon Petroleum’s production and sales substantially: In 2012, the company’s production reached 1,195 thousand barrels per day; its volume of sale was 1,599 tb/d. This recent addition from BP will augment the company’s production by 37% and its volume of sales by 28%. So not only the refinery industry is growing, Marathon Petroleum is also augmenting its business.

Tesoro, another leading refiner and marketer of petroleum products, is liked by many leading hedge funds. One reason may be due to the company’s growth in revenues in recent years: The company’s net revenues rose by 8.8% (year over year) in 2012. Most of the growth came from the rise in refined product sales profit margin (the price) that rose by nearly 12% (y-o-y); the refined product sold (in barrels per day) rose by only 5%. If the company’s profit margin will dwindle, it could impede its revenues growth.

The company’s decision to raise its dividend by 33% to $0.20 per share per quarter may have also helped pull up the company’s stock during 2013.

From the demand standpoint, the U.S economy showed some signs of slowdown in its growth: the Philly Fed index slightly declined during April, the manufacturing PMI (opens pdf) slipped to 52, which is lower than in. Moreover, the situation in Europe isn’t improving as the manufacturing PMI of the Euro Zone and Germany were below the 50 point mark. In China, the recent lower than anticipated growth rate of its GDP in the first quarter of 2013 and the decline in its manufacturing PMI also suggest China’s economy is growing as slower rate than in the past. These reports suggest the demand for oil in these countries might fall.

Assuming OPEC’s production will remain at 30.2 mb/d and its NGLs and non-conventional output will settle at 6 mb/d; adding the expected output in 2013 of non-OPEC of 54.4 mb/d, the total oil supply in 2013 is projected to settle at 90.6 mb/d – the same as the oil demand. This balance could lead to a sharp rise in oil prices, if the supply will contact or if the demand will exceed current expectations.

Based on the above, I think the global price of oil might bounce back as the year will progress. The current delicate balance between supply and demand, even with the weak growth of global demand, might go off and lead to a rise in oil prices. In such a case, leading refinery companies will benefit from this recovery.