Shares of leading Utilities companies have rallied in the stock market in recent weeks. Was their rally based on fundamental change in the utility industry? Will utility companies such as Duke Energy (NYSE:DUK) and FirstEnergy (NYSE: FE) continue to trade up?

The recent rally of these companies may have been stem from the shift in market sentiment towards more defensive stocks: stocks with (relatively) low growth, stable and high dividend yields. The shift in market sentiment may have been due to the concerns regarding the future progress of U.S economy – the latest employment report showed a lower than anticipated growth in employment. The upcoming earning season might also disappoint investors, which will also pull investors out of risky assets and into less risky assets such as Utilities.

The table below shows the payout ratio of the above-mentioned companies.

But these companies perform differently from one another: their profit margin and growth in revenues varies. The table below shows the profit margin of these three companies in recent quarters. 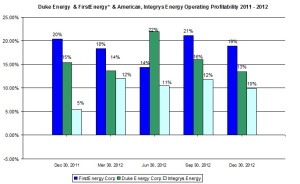 As seen above, Duke Energy and FirstEnergy lead the way with an operating profitability ranging between 13% and 22% for Duke Energy, and 14% and 21% for FirstEnergy. Regarding the profit margin of FirstEnergy, I have adjusted it to exclude one time provisions such as pensions, OPEB mark-to-market and impairment of long lived assets.

The operating profitability of these two companies declined in the last quarter compared to the same quarter in 2011.  On the other hand, the profit margin of Integrys Energy doubled from 5% to 10% as of Q4 2012.

In the fourth quarter of 2012 these companies’ growth in revenues also varied from one another: Duke Energy led the way with 69% growth compared to the same quarter in 2011; Integrys Energy had a growth rate of 6.2% in the last quarter. Conversely, FirstEnergy’s revenues tumbled down by 22% in the past quarter. This figures show that the conception that Utility companies have low and stable growth is untrue.  If the demand for electricity will rise in the coming months, these companies may augment their profit margin and revenues. So is the electric market heating up?

If the industry will continue to do better in 2013 than it did in 2012, these companies will do better. Two main components that could determine the price of electricity (from the supply side) is the prices of natural gas and coal.

Despite the rise in price of natural gas, the average monthly price of coal fell by nearly 4% since the beginning of the year. If the price of coal will continue to fall, the price of electricity is also likely to follow and decline.

The chart below shows the normalized prices (as of January 2012) of natural gas, coal and electricity. 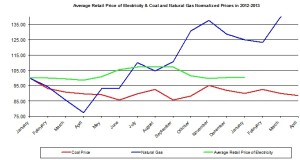 As seen, the price of natural gas picked off in recent months. The price of electricity (as of January) is slightly higher than the same month in January. The price of coal is roughly 10% (as of April) lower than it was back in April 2012.

The recent rally of major utility companies seems to me more related to the shift in market sentiment and less to do with the fundamentals. These companies might perform better this year than they did in 2012 on account of the rise in the price and demand of electricity. But unless the demand for electricity will sharply rise, these companies’ stocks might eventually pull back once the market sentiment will turn direction again.