Is the coal industry slowly making a comeback? Several coal companies such as Peabody Energy (NYSE:BTU) and CONSOL Energy (NYSE:CNX) have rallied in recent weeks: Shares of Peabody increased by 10% during the past month; CONSOL’s stock rose by 16.8%. Despite this recent rise in the stock market, these companies are still down for the year. Will these companies continue to heat up?

In the second quarter most coal companies didn’t increase their revenues: Peabody’s revenues fell down by nearly 13%; CONSOL’s net sales plummeted by 16.4%. On the other hand, Alliance Resource Partners (NASDAQ:ARLP) was able to pull its revenues up as they rose by 4.5%.  The rise in sales was mostly driven by a 13.3% gain in coal sold (in tons), which was offset by the drop in coal prices.

In the coming months, in order to determine the potential growth in revenues of these companies we will need to examine the demand for coal in the domestic and international markets.

Let’s start with the local market and the electric market:

Demand for electricity is rising

The chart below shows the developments in the price of electricity in recent years. 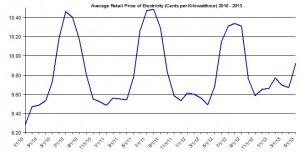 As seen above, the price is likely to keep rising in the coming months as part of a seasonal change. But will this summer be warmer than normal or last year?

During the year (up-to-date) the price of electricity was roughly 1.6% higher than last year’s. This could have positively affected the demand for coal and natural gas in the first half of 2013.

Nonetheless, last year was one of the warmest summers in decades; the current projections are that this summer won’t be as warm as last year. Therefore, the price of electricity may be lower than last year’s in the coming months.

Another factor that could determine the domestic demand for coal is the developments in the natural gas market.

Based on the EIA, in the first half of 2013, the coal production fell nearly 5% (year-over-year). Moreover, in the first five months of 2013, coal exports declined by 2.5% compared to the same time frame in 2012. If this trend will continue, it could suggest coal exports won’t reach last year’s figures, which could also reflect in coal exports of leading coal companies.

Peabody Energy’s exports declined in past quarter and still estimates its exports will further fall in the near future on account of higher cost productions. The company doesn’t expect to sell higher coal volumes (tons): Last year’s coal sales (tons) reached 248.5 million. For this year, total sales are expected to range between 230 and 250 million. If the company will continue to sell at the current pace (based on the first two quarter of 2013) it may not reach this projection.

For 2013, Alliance Resource Partners projects its coal projection will rise by 13% to 14%. But if the price of coal will remain lower than last year’s, it is likely to offset the company’s growth in sales for the rest of the year.

In the second quarter of 2013, CONSOL Energy’s coal production (tons) also rose by 9%. Nonetheless, the company’s tumble in sales’ price by more than 21% led to the sharp drop in revenues. Looking forward, CONSOL’s coal exports won’t account for a large portion of its total coal production that will range between 10% and 20%. The company still estimates its coal production will increase by 10% in 2013 (year-over-year). Based on its production levels in the first half of 2013, the company may not reach its goal.

The coal industry hasn’t done well in the first half of the year. Based on the latest developments in the power sector, the demand for coal is likely to rise but may remain lower than last year’s numbers. This might suggest coal companies listed above won’t augment their revenues compared to last year.