The recent Energy Information Administration petroleum report tries to provide an answer to the ongoing rising gap between the Brent oil price and WTI spot oil price in 2011. In the report, the EIA gives two main explanations for this discount on WTI oil price: the increase in oil stock capacity in the US and the tightness of the oil market in Europe, in part due to the Libyan war.

Here is a weekly review for the week ends on September 2nd of the U.S. oil and petroleum market including: gasoline and crude oil prices; petroleum, oil and gasoline stockpiles:

The chart below shows the petroleum and oil stockpiles levels compared to the WTI crude oil prices during 2010 and 2011. It shows there is an apparent weak lagged effect between the changes in oil stockpiles and WTI spot oil prices. During 2011, the lagged linear correlation between WTI oil price and current oil stockpiles was -0.174. 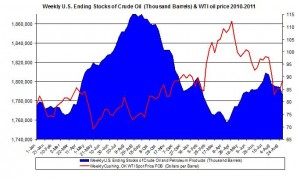 Petroleum production and imports (for the week of September 2nd)

The four week average of US production (million of barrels a day) for the week of September 2nd reached 5.598, which is higher by 0.5% compared with the previous week’s, and is 1.5% above the average production at the same week in 2010;

The recent weather disruptions in the East Coast and the Gulf of Mexico may have been among the factors to cause the decline in production, refinery inputs, on the one hand, and the sharp drop in crude oil stockpiles, on the other.

Below is a detailed recap of the information listed above (for the week of September 2nd):

The average U.S. gasoline retail price rose by nearly a nickel per gallon compared with the previous week’s average; it reached $3.67 /g, which is $0.99 /g higher than the same week in 2010.

The national average Diesel prices also climbed by a nickel compared with the previous week; it reached $3.87/g. which is $0.94/g higher than last year’s average price at same time.

A detailed analysis of crude oil prices for the week of September 2 is herein.