Gold and silver prices tumbled down during most of April. The publication of the minutes of the FOMC meeting along with the negative reports regarding the progress of the U.S and China may have contributed to the tumble of precious metals. By the end of April, gold fell by 7.69%; silver, by 14.66%.

Let’s divide April into two: the table below divides the month at April 11th; I divide the month to demonstrate the change in pace of gold and silver; during the first part of April, gold decreased by 1.9%; silver, by 2.1%. During the second part of April, however, silver tumbled down by 12.8%; gold price fell by 5.9%.

During the first part of April, the U.S dollar depreciated against the Euro, Canadian dollar and Aussie dollar; the USD/CAD and AUD/USD currency pairs are usually strongly correlated with gold and silver prices. During the second part of the month, the EURO slightly rose against the USD. But the Aussie dollar, Canadian dollar and Japanese yen fell.

The chart below shows the developments of gold and silver prices during April, in which the prices are normalized to 100 on March 28th 2013. 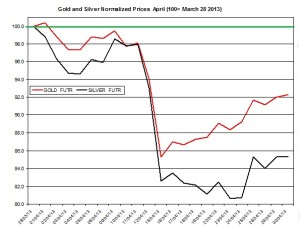 The ratio of gold to silver (gold price/silver price) had an upward trend during April mainly during the most of April. The ratio increased as silver price has under-performed gold price. During April the ratio ranged between 56.5 and 62. 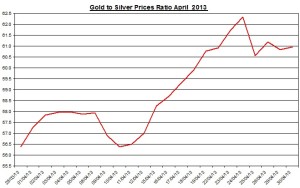 Here are several factors that may have pressured down of gold and silver prices during the month:

The minutes of the FOMC meeting from March and the last FOMC meeting of May 1st may have contributed to the plunge in the prices of gold and silver. The shift in market sentiment is likely to persist as long as the U.S economy continues to slowly recover and the equity markets keep reaching new highs. The upcoming minutes of the FOMC meeting might offer some additional information about the whether the Fed plans to start in the next several months to cut down on its asset purchase program. If the minutes will reveal such a plan, this could further pull down precious metals prices. If the U.S economy will show signs of economic slowdown, this could curb the decline of gold and silver. In Europe, the recent recovery of the Euro currency may have also slightly curbed the fall of precious metals. If the Euro and other leading currencies will decline against the USD, they may also pull down precious metals. The rise in demand for safe haven investments such as U.S treasuries bills didn’t help pull up precious metals. It seems as if precious metals lost their stand as a safe haven. The ongoing decline in the amount of gold held by GLD ETF might suggest the demand for gold as an investment continues to fall. Conversely, the ongoing appreciation of the Indian Rupee might raise the demand for gold in this country. This could mean that while the demand for gold as investment falls, the demand for the physical metal remains robust. In conclusion, I guess gold and silver prices will continue to fall during May.

← Gold and Silver Prices – Daily Outlook for May 2
U.S Employment Rose by 165k in April | Gold & Silver Are Falling →