The bullion market has cooled down as gold and silver prices fell during most of September. The recent decision of the FOMC to keep QE3 program unchanged wasn’t enough to pull back up precious metals prices. The aftermath of the FOMC non-decision resulted in gold and silver sharply rising the next day only to resume their downward trend the following day. How close of a decision it was? The upcoming minutes of the FOMC meeting could answer this question and perhaps offer some information regarding the timing of tapering QE3. Looking forward, will gold and silver continue to fall in October? Let’s breakdown the upcoming events and publications that may affect the bullion market, which will unfold during October; let’s also provide a short analysis for September.

Gold and silver prices fell during September. Their decline didn’t coincide with the developments of the Euro and Aussie dollar against the USD. By the end of September, the price of gold decreased by 4.94%. The price of silver fell by 7.64%.

The chart below presents the changes of gold and silver during September, in which the prices are normalized to 100 on August 30th 2013. 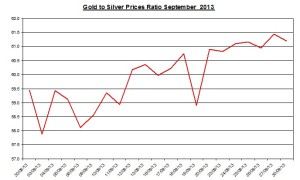 Here are several factors that may have adversely affected gold and silver prices during the month:

Here are several factors that may have positively affected gold and silver during September: