Following the sharp drop in prices of bullion on Monday and Tuesday, precious metals changes direction and bounced back yesterday. Their rally was accompanied with the rise of the Euro against the USD. In Europe, ECB didn’t change policy and Mario Draghi didn’t voice his concern around EU’s inflation. In the U.S, the ADP estimates 166k jobs were added in September – this is likely to be a benchmark for Friday’s non-farm payroll report. In yesterday’s speech, Bernanke avoided referring to the current government shutdown or the FOMC’s policy.  Will gold and silver change direction again? On today’s agenda: U.S. Jobless Claims, U.S. ISM Non-Manufacturing PMI, EU retail Sales, GB Services PMI, and U.S Factory Orders.

Here is a short overview for precious metals for Thursday, October 3rd: 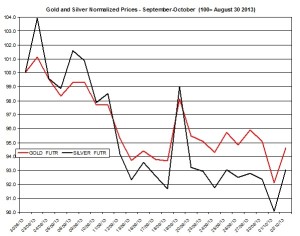 The ratio between the two precious metals slipped again on Wednesday to 60.45. During the week, the ratio decreased by 1.21% as silver has slightly out-performed gold. 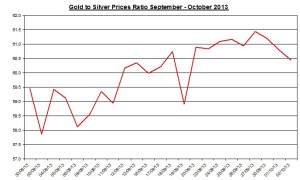 U.S. Jobless Claims Weekly Report:  This weekly report will pertain to the changes in the initial jobless claims for the week ending on September 27th; in the previous report the jobless claims decreased by 5k to reach 305k;

GB Services PMI: In the previous report, this index increased to 60.5; this index may affect the British Pound’s direction;

EU Retail Sales: In the previous update, volume of retail trade rose by 0.1% during July – lower rate than many had anticipated; this news may affect the Euro, which tends to be linked with precious metals prices;

U.S. ISM Non-Manufacturing PMI: This monthly report will refer to September 2013. In the latest update, this index increased again, for the third straight week, to 58.6% – the non-manufacturing sector is augmenting at a faster rate compared to the previous month;

U.S Factory Orders: This report will refer the developments in U.S. factory orders of manufactured durable goods during September; in the previous report factory orders fell by 2.4%; this serves as another indicator for the progress of the U.S economy;

On Wednesday, the Euro/ USD currency pair rose by 0.39% to 1.3579. During the week, the Euro/USD increased by 0.42%. On the other hand, other currencies such as the Canadian dollar and Aussie dollar depreciated yesterday against the U.S dollar by 0.15% and 0.14%, respectively. The correlations among gold, Euro and Aussie have weakened in recent weeks, e.g. the correlation between the Euro/USD and gold price is only 0.21 during September/October.