Gold price fell very sharply yesterday and nearly returned to its initial level from the beginning of September. This fall is consistent with yesterday’s rise in US stock markets and the sharp gains in US Treasury bills yields. Currently, gold and silver prices are traded up. Today, the ECB rate decision will be announced , the US unemployment claims report will be published, along with the Canadian and American trade balance reports. 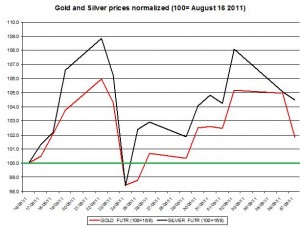 The ratio between gold and silver prices continues to hover around 43-45; on Wednesday, September 7th the ratio slightly fell to 43.66. During September, silver price has slightly outperformed gold price as the ratio declined by 0.4%. 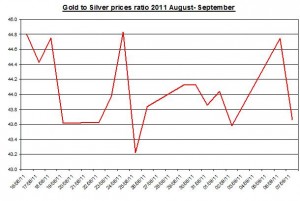 BOC kept rates unchanged at 1%. BOC voiced its concerns over the economic slowdown of Canada during the second quarter 2011.  Despite this news, the US dollar continued to trade down throughout the day against the Canadian dollar.

Obama will speak before Congress on job expansions program

President Obama will address Congress today and ask for an approval of a $300 billion job creating program via tax cuts, infrastructure building and aids to local governments. This program will be set to 2012.

ECB rate decision:  The moderate fall in the Euro Area inflation rate, which reached in July 2.5% (in annual terms) and the slowdown in growth – Euro Area Q2 2011 GDP grew by only 0.2%, are probably the two main factors to pressure Jean Claude Trichet, President of the European Central Bank, to cut ECB interest rates. I don’t think he will eventually cut rates in this upcoming decision, but he may consider in the following months. In any case, if ECB will keep rates unchanged (high chance), it is likely to lower the Euros to US dollar, and thus may put some pressure on gold prices to trade down (see here the recent update of ECB rate decision).

U.S. unemployment claims In the recent report regarding the week ending on August 27th, initial claims decreased by 12,000 to 409,000 claims and the number of insured unemployment was 3.735 million, a decrease of 18,000 compared with the previous week’s (see here my recent review on the US Labor market);

US trade Balance report: The American trade balance report for June 2011 showed the goods deficit increased by $2.1 billion compared with May 2011 and the goods and services deficit increased by $2.3 billion to $53.1 billion; This report is another indicator of the expansion and contraction in US economy and could affect US dollar and consequently the US stock markets and gold prices.

The US 10-year Treasury yields changed direction and rose yesterday by 0.07 percent points; during September they have fallen by 0.18 percent points. This means the demand for U.S. Treasury bills slowed down yesterday as their yields increase; this change could be just a market correction, as their yields are still in a downward trend in September. 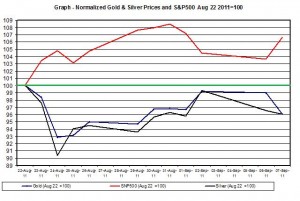 The Euro to US dollar exchange rate changed direction after five consecutive business days of falls, and rose by 0.71%; this depreciation of US dollar against the Euro didn’t seem to affect gold and silver prices yesterday as they were traded down. The US dollar also sharply depreciated yesterday against other major currencies including Australian dollar and Canadian dollar.

The precious metals prices are currently traded up in the Asian markets:

The current ratio of gold to silver prices is at 43.75.

Gold and silver prices declined again for the second straight day, but they are currently rising, These falls are consistent with the rise in US Treasury bills yields and the increase in US stock markets indexes; the recent falls could be a technical correction to the sharp gains in gold and silver prices during August. The upcoming ECB rate decision could have an effect on the financial markets if there will be a surprise rate cut.  I still speculate gold and silver prices will continue to rise at a slow pace.