Gold and silver prices continue to zigzag and after they had both spiked on Friday, on Monday they have slightly declined. The G-7 will convene today and talk about the EU debt crisis. Currently gold and silver are trading up. On today’s agenda: U.S ISM Non-Manufacturing PMI report, Reserve Bank of Australia – Cash Rate Statement, Australian GDP quarterly update, German Factory orders and Bank of Canada’s Overnight Rate decision.

Here is a short analysis for gold and silver for Tuesday, June 5th:

The chart below presents the normalized rates of these metals during the past couple of weeks (normalized to 100 as of May 15th). 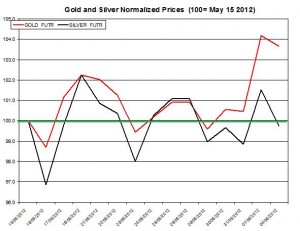 The ratio between the two metals rose again on Monday to 57.62. During the month the ratio increased by 2.26% as silver has moderately under-performed gold during the month. 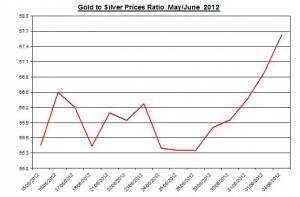 U.S. ISM Non-Manufacturing PMI: During April 2012 this index declined to 53.5% – this still means the non-manufacturing is expanding but at a slower pace than before; this index may affect the USD and consequently precious metals ;

German Factory orders: this news could indicate the progress of the German Economy and consequently may affect the strength of the Euro; last time, the orders sharply rose by 2.2%;

Reserve Bank of Australia – Cash Rate Statement: If RBA will decide to change the rate this news may affect the Australian dollar which is strongly correlated with bullion rates;

Australian GDP Q1 2012: The recent slowdown in China’s growth might also affect the growth of Australia’s GDP. Australia is among the leading countries in exporting commodities such as crude oil and metal ores; if the growth rate will continue to dwindle it could affect the Australian dollar;

Bank of Canada’s Overnight Rate: The Bank of Canada will publish its decision regarding the overnight interest rate, which remained unchanged at 1% in the previous decision. The BOC may continue its policy and keep the interest rate flat;

The Euro/U.S Dollar increased again for the second consecutive business by 0.52% to 1.25. During the month (UTD) the Euro/U.S Dollar rose by 1.1%. Furthermore, “risk currencies” such as the Aussie dollar and Canadian dollar also slightly appreciated during Monday against the USD by 0.29% and 0.17%, respectively. If the U.S dollar will continue to decline against these currencies, it might positively affect bullion rates. Currently the Euro is edging up against the USD.

Current Gold and Silver Prices as of June 5th

Bullion prices started off the week with little movement after both precious metals spiked on Friday. I speculate bullion is likely to shift from gains to losses during the day and might eventually slightly rise.   The upcoming G-7 meeting about the EU debt crisis might produce some headlines that will eventually fuel the speculation about the future of Greece in the EU and the recent liquidity problems that Spain is facing. The upcoming U.S ISM non-manufacturing PMI report might also affect the markets if it will differ from its previous survey. A sharp fall in this index might fuel the speculation around the next move of the Fed, which will help gold and silver to trade up. If the Canadians or Australians will change their interest rates, this could also affect their respective currencies.

Finally, another gain in the German Factory orders could positively affect the Euro and in turn also help rally precious metals during the day.