The bureau of economic analysis published yesterday its second estimate of U.S. GDP 2011 third quarter of 2011: 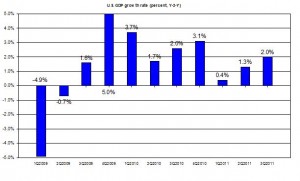 On the one hand, this news shows a higher growth rate than in the two previous quarters, but on the other hand the growth rate for Q3 2011 was revised down; this revision may have been among the factors to adversely affect the American stock markets yesterday and could continue to affect traders to trade down stock along with major commodities such as crude oil and gold.

Currently the American stock markets along with the major commodities prices such as crude oil prices and gold price are falling: