In the recent report of the Bureau of Labor Statistics, the U.S inflation for September 2011 inclined by 0.3% or in annual terms it rose by 3.9%. The CPI without food and energy also rose by only 0.1% during September and 2% in the past twelve months.

The prime reason for the increase in the U.S. inflation was related to the energy index that sharply inclined by 2.0% (M-2-M) during September. In annual terms the energy index increased by 19.3%; among the energy products, the gasoline prices led the hike with a 2.9% increase during September; this was higher growth rate compared with the increase of 1.9% in August. This effect is primarily exogenous to the U.S economy as the oil and gasoline prices are mainly determined by global events such as the concerns regarding the Euro Area crisis, changes in U.S. stock markets and changes in U.S dollar against the risk currencies such as CAD and AUD.

The core US inflation (CPI without energy and food) also inclined but by a lesser extent of a 0.1% gain in September and by a total of 2% in the past 12 months.

The report also showed, an increase in food index by 0.6% during September and in annual terms food index increased by 4.7%. 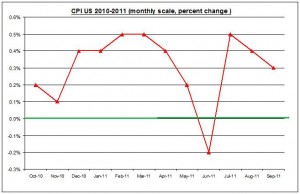 This news may affect the US dollar, and consequently may affect gold silver and prices.