Crude oil prices started the day with sharp falls as the Fed lowered its GDP growth rate for 2011. On the other hand, China might start to show an increase in crude oil. Today the US labor report and US home sales will be published.

Here’s a short analysis of the crude oil market for today, June 23rd:

According to recent news, the IEA will release 60 million crude oil bbl from its strategic reserves in order to top off the shortage in crude oil supply caused by the current war in Libya. This news might be among the reasons for the sharp fall in crude oil prices, but this move is a short term solution and the only way the uncertainty around the current oil supply will be resolved is if OPEC will raise its crude oil quota. 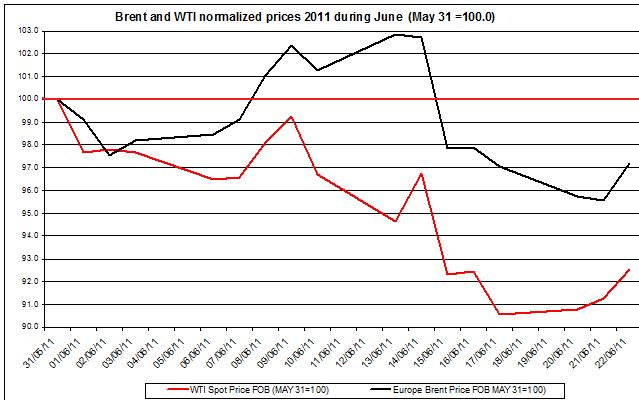 The premium of Brent oil over WTI spot oil 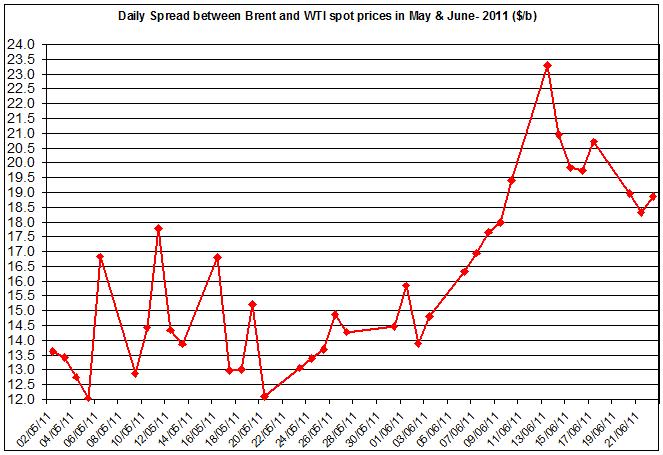 Following the spike in the premium of Brent oil over WTI a few days back, the gap between Brent oil and WTI spot oil is closing, but it is still high.

As expected, the Fed kept the basic interest rate unchanged between 0 and 0.25%. This rate remained unchanged for the past couple of years.

The Fed also updated the US GDP growth rate to 2.7-2.9 after it was 3.1-3.3% in the April forecast. This forecast might have caused investors to trade down major commodities as crude oil prices are falling today.

There was still no sign of a new QE/ stimulus plan in Ben Bernanke’s speech; this might keep US dollar strong compared with major currencies.

The chart below presents the petroleum and oil stocks levels compared to the WTI crude oil prices during 2011. 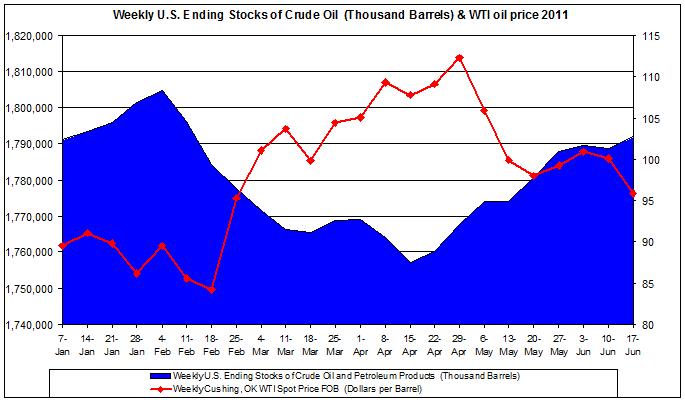 According to the report the complex structure of the electricity market of China might result in an increase in China’s crude oil demand despite the slowdown of its economy (see here for further details). If this analysis will prove to be correct, it may push crude oil prices up in the months to come.

Major crude oil prices are currently traded down at the European markets:

The Fed’s update about not issuing at this stage any new stimulus along with the new updated GDP growth rate of the US economy are probably among the main reasons traders are currently trading crude oil down.

From the demand side, there is usually a rise in demand for crude oil due to seasonality effect (summer); China’s role in the world’s crude oil demand will be a key factor.

From TA side, if the Fed will eventually launch a new stimulus plan in the next few months this might weaken the US dollar and result in driving crude oil prices up.

13:30 – US Department of Commerce – Report on Durable Goods