The week started on a positive note for both gold and silver as they bounced back from their plunge during last week. Yesterday, it was reported that U.S existing home sales slipped in March on account of limited inventory. The number of home sales fell by 0.6% to an adjusted annual rate of 4.92 million. Later that day, China’s flash manufacturing PMI report (opens pdf) came out, in which the PMI slipped in April slipped to 50.5 – in March it was 51.6. This month’s index is the lowest in two months. It means, the manufacturing sectors in China are still growing but at a slower pace. This news might pull back down precious metals. Will gold and silver change course? On today’s agenda: Flash German, French and Euro Zone Manufacturing PMI, Canada Retails Sales, BOC Gov Carney Speaks, U.S. new home sales, and Australia’s CPI for Q1 2013.

Here is a short outlook for precious metals for Tuesday, April 23rd: 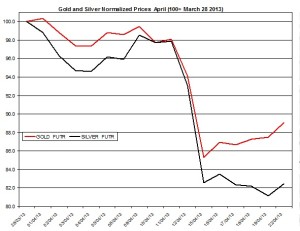 The ratio between the two precious metals slightly increased on Monday to 60.92. During the month, the ratio rose by 8.08% as gold out-performed silver. 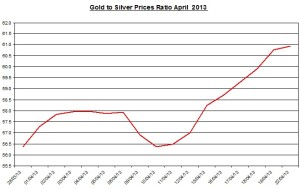 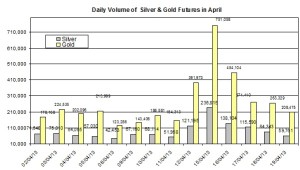 U.S. New Home Sales: This report will pertain to March; in the previous report (opens pdf; for February), the sales of new homes fell to an annual rate of 411,000 – a 6% drop (month over month); if the number of home sales will continue to dwindle, it may indicate a sign of a slowdown in the recovery in the U.S real estate market which may also influence bullion traders.

Canada Retails Sales: This report will pertain to the retails sales in Canada as of February. It may affect the USD/CAD currencies pair, which is strongly correlated with commodities rates. In the previous report regarding January 2013, retails sales rose by 0.5%.

BOC Gov Carney Speaks: Carney will testify before the House of Commons Standing Committee on Finance, in Ottawa. His speech might affect the Canadian dollar if his speech will provide a surprising headline;

Australia‘s CPI for Q1 2013: This quarterly report will pertain to the changes in the consumer price index. In the recent report regarding the fourth quarter of 2012, the CPI rose by 0.2% compared to the third quarter and by 2.2% compared to Q4 2011;

The Euro/ USD edged up on Monday by 0.11% to 1.3066. During April, the Euro/USD increased by 1.95%. Moreover, other currencies such as the Japanese yen and Canadian dollar also slightly appreciated yesterday against the U.S dollar by 0.29% and 0.10%, respectively. The appreciation of leading currencies against the U.S dollar may have slightly contributed to the recovery of gold and silver. The correlations among gold, Euro and Aussie dollar remained strong: during April the linear correlation between gold and USD/CAD was -0.58 (daily percent changes); the linear correlation between the gold and USD/Yen was 0.33 (daily percent changes). If these correlations will hold up, precious metals rates might be affected by the developments in the foreign exchange markets.

Current Gold and Silver Rates as of April 23rd