Gold and silver prices remained nearly unchanged as gold rose while the price of silver edged down. U.S jobless claims tumbled down by 30k to 339k this positive news may have contributed to the modest rally in the commodities and stock markets.  The modest rally of the Euro may have helped pull up the price of gold.  Currently, the prices of gold and silver are declining. On today’s agenda: U.S. Producer Price Index, UoM Consumer Sentiment, Euro Area Industrial Production, and FOMC member Lacker’s Speech.

Here is a short outlook for precious metals for Friday, October 12th:

As seen below, the chart shows the developments of normalized prices of precious metals during September-October (normalized to 100 as of September 13th). During the week, gold and silver modestly declined. 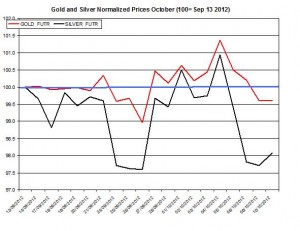 The ratio between the two precious metals rose on Thursday to 51.95. During October, the ratio increased by 1.26% as silver slightly under-performed gold. 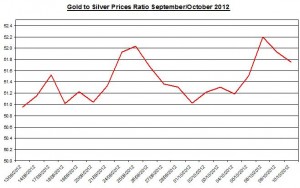 Besides the ongoing weakness of the Euro due to the debt crisis in Spain and the recent grim outlook of the IMF regarding the future economic progress of the Eurozone, the core Euro-zone countries including Germany and France aren’t doing well. There are reports that the recent weak economic reports regarding the progress of these countries suggest they aren’t doing too well. This means the Euro could remain weak against the USD in the near future, which could also curb the rally of gold and silver prices.

U.S. Producer Price Index:. In the recent report regarding August this index for finished goods hiked by 1.7% compared with July’s rate and rose by 0.5% in the last 12 months; this news might affect commodities;

UoM Consumer Sentiment: University of Michigan will issue its preliminary consumer sentiment report; this survey could offer another insight to recent developments in U.S consumers sentiment about the economy; last time the sentiment index increased again to 79.2;

FOMC member Lacker’s Speech: The title of the speech is “Challenges to Economic Growth“; 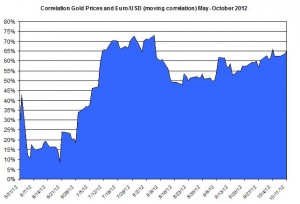 Current Gold and Silver Rates as of October 12th

The prices of precious metals remained nearly unchanged yesterday and the anticlimax in the bullion market following the decision of the FOMC to launch QE3 continues. The modest rally of the Euro and Aussie dollar may have contributed to the little rise in the price of gold. On the other hand, until Spain will make a move regarding making a request for ECB to start its bond purchase program, or Europe will show some signs of recovery the Euro is likely to remain low and thus could further drag along with it precious metals prices. Today’s Euro Area industrial production might further affect the forex and commodities markets: if the report won’t be positive it could further pull down the Euro. Finally, the U.S PPI could affect the price of gold and silver via the reports effect on the USD.