Gold and silver prices tumbled down again along with other commodities. The Euro/USD reached yesterday its lowest level in nearly two years. The speculation around the future of Greece in the EU is likely to be among the factors dragging down not only the Euro but also precious metals.  The U.S new home sales rose in April. The recent Summit of the European Leaders didn’t bring big headlines as German Chancellor Merkel still opposes a jointly issued EU bond.

Here is a short outlook for gold and silver for Thursday, May 24th:

The chart below presents the normalized rates of precious metals during month so far (both metals rates are normalized to 100 as of April 30th). 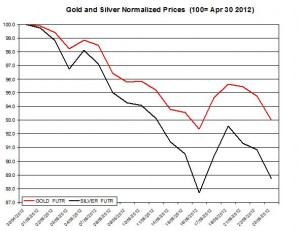 The ratio between the two metals rose on Wednesday to 56.27. During the month the ratio rose by 4.87% as silver has moderately under-performed gold during the month. In the chart below are the developments of this ratio during May. 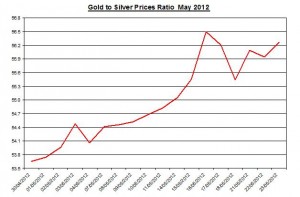 According to the recent U.S new home sales report for April the number of homes sold increased by 3.3% to a seasonally adjusted annual rate of 343 thousand home sales; this is another positive report that shows some slow progress in the U.S housing market (the previous report on existing home sales was also positive).

This news might have been among the factors to pull down gold and silver prices.

U.S Core Durable Goods: This report may indirectly show the shifts in U.S. demand for commodities. According to previous report for March, new orders of manufactured durable goods decreased by $8.4 billion to $203 billion; if this report will continue to be negative then it could curb the recent appreciation of the US dollar and also affect gold oil and silver prices;

U.S. Jobless Claims Weekly Report:  in the latest report the jobless claims remained unchanged at 370,000; this upcoming weekly report may affect the path of the U.S dollar and consequently commodities;

German Business Climate Survey: In the previous report for  April 2012, the business climate index edged up from 109.8 in February to 109.9 in April; if this upward trend will change direction, it might further pull down the Euro;

ECB President Draghi Speaks: The President of ECB, Mario Draghi will talk at Bank of Italy in Rome. Given the recent political changes in Greece and tumble of the Euro, if Draghi will refer to the speculation around the Greek debt crisis and the stands of ECB on the current situation this could affect the forex and commodities markets;

The Euro/U.S Dollar declined again on Wednesday by 0.79% to 1.2584 – the lowest level in nearly two years. During the month (UTD) the Euro/U.S Dollar fell by 4.95%; it seems that many consider the possibility of Greece exiting the EU as a viable option. Furthermore, other “risk currencies” including the Australian dollar and Canadian dollar also depreciated during Wednesday by 0.64% and 0.44%, respectively. Since these currencies pairs are still linearly correlated with bullion prices, if the U.S dollar will continue to trade up, bullion might also continue to fall. Currently the Euro is declining against the USD.

The U.S. 10-year Treasury yield resumed their descent on Wednesday and reached 1.73%. During May the 10 year treasury yield declined by 0.22 percent point. This decline in LT securities yields may indicate that the demand for “secure investments” continue to increase especially considering the developments in Europe. During May there was a low and positive correlation between the daily changes in U.S. long term Treasury yield and shifts in gold price. Nevertheless the trend of both indexes as seem in the chart below shows that both U.S. 10 yr yield and gold price have a downward trend during the month. The chart below suggests that if the LT U.S. treasury yield will continue to decline, it might indicate that gold will further tumble down. 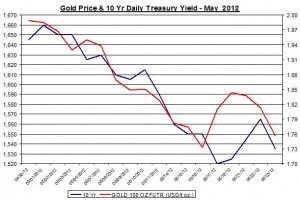 Current Gold and Silver Prices as of May 24th

Daily Outlook for May 24th

Gold and silver prices continued their downward trend during yesterday’s trading. The recent news of the rise in U.S new home sales along with the speculation around the future of Greece in the EU may have driven precious metals prices down.  The upcoming report on the core durable goods and jobless claims might continue to play a role in direction of precious metals prices. If these reports will be positive metals might continue to trade down. Finally  the upcoming German business climate survey might further pull down the Euro since the survey came out negative.

← How will a Greek Exit Affect Gold and Silver?
Gold Silver and Oil Bounced Back on Thursday–Recap May 24th →