The prices of gold and silver jumped yesterday and reached their highest level since June. Their rally coincided with the depreciation of the US dollar against leading currencies such as Euro and Aussie dollar. Moreover, the tumble of leading U.S stock markets. The U.S CPI report showed a moderate rise in U.S inflation by 0.2%; the core CPI inched up by the same rate. The low growth in inflation suggests the Fed may keep its asset purchase program unchanged in order to maintain the potential growth in U.S economy. The Philly Fed index fell to 9.3, which is also not a good sign for the progress of the U.S . Jobless claims fell by 15k to reach 320k during the week ending on August 10th. Will gold and silver continue their upward trend? On today’s agenda: Euro Area CPI, Canada Manufacturing Sales, U.S. Housing Starts and Building Permits, and UoM Consumer Sentiment.

Here is a short breakdown for bullion market for Friday, August 16th: 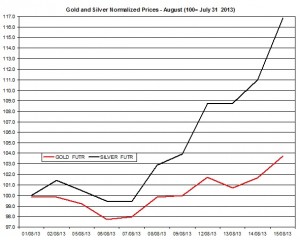 The ratio between the two precious metals tumbled down again on Thursday to 59.35. During August, the ratio fell by 11.24% as silver out-performed gold. 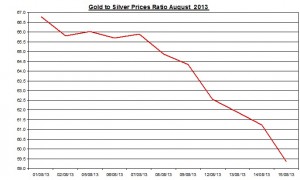 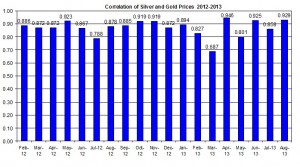 Gold and silver futures volumes of trade remained low and reached on Thursday 127 thousand and 66 thousand, respectively. If the volume will continue to remain low, this could suggest the odds of sudden sharp movement in the prices of gold and silver due to low volume will diminish.

See here the weekly outlook for gold and silver for August 12-16.

Euro Area CPI: Based on the latest update the annual CPI rose to 1.6%, which is still below ECB’s target inflation; if the inflation will continue to rise, it could lower the odds of ECB cutting again its cash rate;

U.S. Housing Starts: This report was historically linked with gold – as housing starts falls, gold prices tended to rise the next day (even when controlling to the U.S dollar effect); in the latest monthly report, the adjusted annual rate reached 836,000 in June 2013, which was 9.9% below May’s rate;

UoM Consumer Sentiment (preliminary):University of Michigan will publish its preliminary consumer sentiment monthly report; this survey could offer information regarding the latest developments in U.S consumers’ sentiment; According to the previous update, the sentiment index rallied to 83.9;

The Euro/ USD currency pair changed direction and rallied on Thursday by 0.69% to 1.3347. During the month (up-to-date), the Euro/USD rose by 0.34%. Moreover, other currencies such as the Canadian dollar and Aussie dollar also appreciated yesterday against the U.S dollar by 0.35% and 0.21%, respectively. The correlations among gold, Euro and Aussie dollar have weakened, e.g. the correlation between the Euro/USD and gold price was 0.38 during recent weeks. This means the effect the changes in the forex market has on bullion prices has diminished. The table below shows the linear correlations among precious metals and leading currencies pairs. 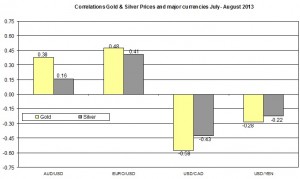 Current Gold and Silver Rates as of August 16th