The bullion market shifted gear and both gold and silver bounced back yesterday, following their plunge during last week. The Italian elections resulted in a deadlock which may have led to the weak Euro. This news, however, didn’t seem to hold back precious metals prices from rising. Will gold and silver change course and fall today? Currently, the price of gold is rising. On today’s agenda:  Ben Bernanke will testify at the Hill, U.S Consumer Confidence and new home sales reports will come out..

Here is a short outlook for precious metals for Tuesday, February 26th: 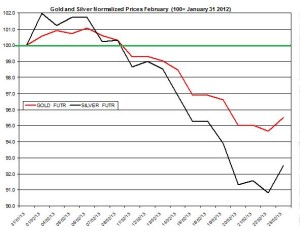 The ratio between the two precious metals declined on Monday to 54.72. During the month, the ratio rose by 3.25% as gold slightly out-performed silver. 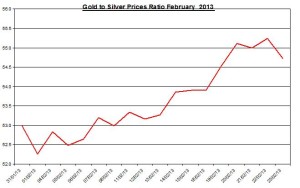 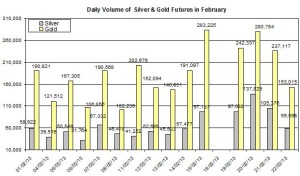 Bernanke’s Testimony: Following the recent publication of the minutes of the January FOMC meeting, if Bernanke will hint of the future plans of the FOMC vis-à-vis the QE3 and the timeframe the Fed might consider putting on it, this news could pull down commodities rates. The Chairman of the Federal Reserve will testify before the Committee on Banking, Housing, and Urban Affairs in the U.S Senate. The title of the testimony is “Semiannual Monetary Policy Report to the Congress“;

U.S Consumer Confidence: based to the latest report, the consumer confidence index fell in December to 58.6 (M-o-M). The current expectations are that the January index may continue to fall; this report might affect commodities prices including the oil and natural gas rates;

U.S. New Home Sales: in the latest report (for December), the sales of new homes rose to an annual rate of 369,000 – a 7.3% drop (month over month); if the number of home sales will further fall, it may indicate a sign of a slowdown in the recovery in the U.S real estate market which may also affect the direction of the USD.

The Euro/ USD, on the other hand, declined on Monday by 0.99% to 1.3064. During the month, the Euro/USD fell by 3.79%. Moreover, some currencies such as the Canadian dollar and Aussie dollar also depreciated yesterday against the USD by 0.48% and 0.6%, respectively. The recent depreciation of Euro and other “risk related currencies” didn’t seem to hold back precious metals from rising. The correlations among gold, Canadian dollar and Aussie dollar have weakened in recent days: during January/February, the linear correlation between gold and USD/CAD reached -0.13 (daily percent changes); the linear correlation between the gold and AUD/USD dropped to 0.28 (daily percent changes). These mid-weak correlations might imply the recent rally of gold and silver rates wasn’t related or resulted from the developments in the foreign exchange markets. Nonetheless, if the Euro and other risk currencies will continue to decline against the USD, they might eventually partly affect gold and silver and pull them down.

Current Gold and Silver Rates as of February 26th

The rates of precious metals changed course and spiked yesterday after they had declined during recent weeks. The recent rally may have been a correction for the sharp fall in the prices of bullion. The high volatility of bullion rates is likely to continue as the week will progress. Today’s events including the testimony of Bernanke could stir up the bullion and forex markets. This may occur if the Fed Chairmen will bring some new perspective regarding the future steps of the Fed. If he won’t bring something new to the table, his testimony might go unnoticed in the bullion market. The appreciation of the U.S dollar against leading currencies during yesterday didn’t seem to hold back by much the recovery of bullion rates. This trend might continue in the coming days. The upcoming U.S related reports to be published today including new home sales, and consumer confidence could affect not only the USD but also bullion rates. If the U.S economy will show signs of growth, it could contribute to the bullish market sentiment, which might stir investors away from safe haven investments such as gold and silver.   Finally, if the Euro and other “risk currencies” will continue to depreciate against the USD, they may also pressure down gold and silver prices.