Gold and silver prices bounced back on Tuesday after they had declined on Monday. Yesterday it was reported that the U.S factory orders (new orders) rose by $2.7 billion in May. The recent news of the IMF lowering the U.S GDP growth rate to 2% in 2012 may contribute to economic growth of U.S. Some think there is a chance of the Fed announcing of another QE program, but I still it won’t occur in the upcoming FOMC meeting at the end of the month. Since today is Fourth of July the U.S market will be closed so bullion trading will only be in Asia and Europe. On today’s agenda: Australian Trade Balance.

Here is a short outlook for gold and silver for Wednesday, July 4th:

The chart below shows the normalized rates of these precious metals during the past few weeks (normalized to 100 as of June 20th). 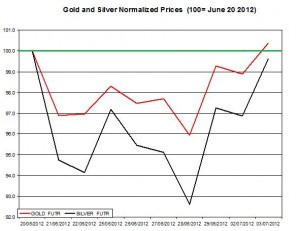 The ratio between the two metals declined on Tuesday to 57.35. During July the ratio fell by 1.29% as gold has slightly under-performed silver. 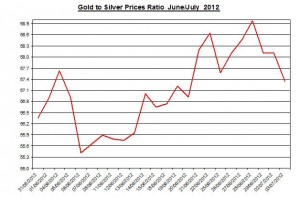 Australian Trade Balance: In the previous report, the seasonally adjusted balance of goods and services contracted from a deficit of $1,283 million in March 2012 to a $203 million deficit in April. The export of non-monetary gold fell by $24 million (2%); if the gold exports will continue to fall May, it might suggest a drop in the demand for non-monetary gold (see here last report);

The Euro/US Dollar slightly rose on Tuesday by 0.25% to 1.2608. During the month (UTD) the Euro/U.S Dollar decreased by 0.46%. Alternatively, other exchange rates including the Aussie dollar depreciated on Tuesday against the USD by 0.1%. If the Euro/USD will change direction and trade down, it could pull down along with it bullion rates. Currently the Euro is edging down against the USD.

Current Gold and Silver Rates as of July 4th

Gold and silver started off the week with little movement but coming Tuesday they both bounced back. The rally in bullion was inline with the rise in other commodities rates and U.S stock markets. Since the U.S markets will the closed today there is likely to be little movement in the commodities markets. Bullion rates might continue to zigzag from gains to losses and basically move in the same direction as the major currencies pairs including Euro/USD.