Gold and silver prices continued their rally during last week as the bullish sentiment vis-à-vis the bullion market progress. The recent announcement of the FOMC to keep interest rates low until late 2014 (instead of the FOMC’s former pledge to keep rates low until mid 2013) may have been among the key factors in pushing up precious metals on Wednesday. The negative reports that came out last week in regards to the U.S. housing market (new home sales had declined) and U.S. initial claims had risen by 21k (w-o-w) may have also positively affected the direction of gold and silver prices, via the depreciation of the U.S dollar. Finally, the U.S. GDP estimate came out on Friday and presented a 2.8% gain in the fourth quarter. This report didn’t seem to affect much bullion traders as market ended on Friday with only slight gains.

Here is a short summary of the development of gold and silver prices during the week of January 23rd to January 27th 2012:

During the week, the average daily percent change of gold price augmented by 0.85%; silver price also increased by an average daily rate of 1.31%.

In the following chart are the changes of silver and gold prices, which were normalized to 100 to the end of last week – January 20th. Gold and silver prices continued their rally throughout most of last week. 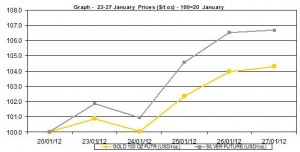 The second chart shows the daily percent changes of silver and gold prices (or in other words the fluctuations around the trend). Gold and silver prices started off the week rising, but on Tuesday they have changed directions and moderately declined; throughout the remainder of the week gold and silver were traded up with the sharpest gain came on Wednesday – the day of the FOMC rate decision. 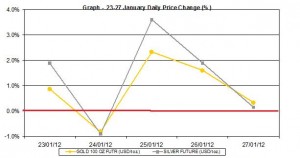