Precious metals prices started off the week with slight changes as gold price moderately declined and silver slightly rose. Following the approval of the austerity plan by the Greek parliament, the riots in Greece continue and raise the question whether Greece will be able to implement its own austerity plan. If there will be other developments from this region it might affect the Euro. Moody’s will cut the credit ratings of six EU countries including Italy, Spain and Portugal. It might cut in the future the rating of France, UK and Austria.

Here is a report of major news and events, and an analysis of metals prices for Tuesday, February 14th:

The chart below presenters the development of gold and silver during February (prices are normalized to January 31st). 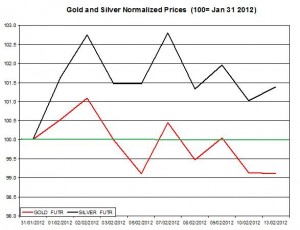 The ratio between gold and silver moderately declined on Monday, February 13th at 51.15. During February the ratio declined by 2.24% as silver slightly outperformed gold. In the chart below is the development of this ratio during the month. 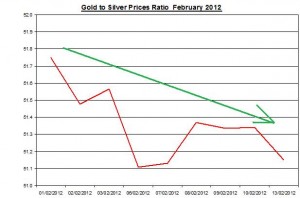 Great Britain Consumer Price Index: this report will present the yearly rate of GB’s consumer price index for January; some expect the January inflation will be lower than in recent months; this news may affect British pound trading;

Gold and silver prices continue to shift from gains to losses with no clear path as they have been doing during most of February. The ongoing development from Greece and recent announcement of Moody’s might adversely affect the Euro and thus may also trade down gold and silver prices during the day. The financial reports to be published today regarding U.S. and Germany (listed above) might also affect the forex and commodities markets.