Gold and silver prices sharply declined on the first day of November; this movement was probably driven in part by the news from Greece of a referendum. Today the FOMC will release a statement and Bernanke will also give a speech. Currently gold and silver prices are traded up. Today, the ADP of U.S. employment estimate will be published and the Australian Retail Trade report.

Here is a market outlook of precious metals prices for today, November 2nd: 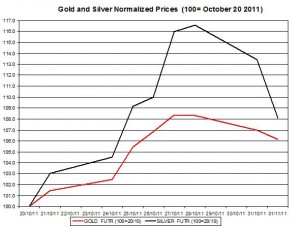 The ratio between gold and silver prices sharply rose on Tuesday, November 1st to 52.30. During the week, silver price declined by a larger rate than gold price as the ratio rose by 5.6%. The chart below shows the developed of this ratio since August. 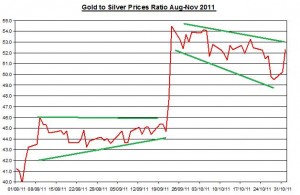 Following last week’s EU agreement on a reduction on the Greek debt, yesterday it was announced that Papandreou, Prime Minister of Greece, has put the European Union’s debt plan to a referendum. This move puts the recent EU agreement on debt reduction for Greece at risk if it won’t pass by the Greek voters (see here for more on this subject).

Sarkozy and Merkel agreed to meet with Papandreou today, Wednesday November 2nd in Cannes, France in order to talk the recent turn of events. This news may have been among the key factors to push major currencies such as Euro and CAD down against the USD. This news is also among the factors that affected gold and silver prices to fall via the strengthening of the USD.

ADP Estimate of U.S. Change Employment: ADP will give an estimate in the U.S employment for October;

Australian Retail Trade: In the last report regarding August, the seasonally adjusted retail trade slightly inclined by 0.3% (M-2-M). This news may affect AUD traders and consequently commodities that Australia exports;

The Euro to U.S Dollar exchange rate sharply declined on Tuesday by 1.12% to reach 1.3703 – the lowest level since January 12th. The recent involvement of Japan in the forex exchange rate markets and the recent news of Greece’s referendum may have been among the factors to drive major currencies such as EURO and AUD to drop against the USD and consequently may also be a partial explanation for the recent decline in gold and silver prices. If there will be a correction in the Euro and AUD, it could also affect bullion prices to make a comeback.

The U.S. 10-year Treasury yield continued to decline on Tuesday by 0.16 percent points to 2.01%; during the week the 10 year treasury yield dropped by 0.33 percent point. The LT yields sharply fell in the past few business days and coincided with the sharp falls in gold and silver prices. If the yields will continue to fall, this might indicate a slowdown in the growth for risk appetite in the financial markets; this shift may also curb the demand for commodities.

The current ratio of gold to silver prices per ounce is at 51.17.

The sharp declines in gold and silver prices in the past couple of days coincided with the sharp falls in the stock and Forex markets and the increased demand for LT U.S. securities. This shift in the markets might indicate the cooling off the markets for riskier financial instruments. It also seems that traders considered gold and silver more risky than in previous months. The FOMC meeting might stir up the markets if there will be a new stimulus plan, or even a hint of one in the making. The movement of gold and silver prices is likely to continue to coincide with   the changes in the in major forex currencies such as YEN, EURO and AUD against the USD.