Crude oil prices slightly declined during last week after oil prices rose during the past couple of months including November and October.  There are many news items on next week’s agenda including the OPEC meeting and OPEC and IEA’s monthly report on the global oil market. The oil stockpiles rose again during last week for the second straight week.

Here’s an outlook and analysis of the crude oil market for the week of December 12th to December 16th:

The chart below shows the development of WTI spot oil and Brent oil prices during December (prices are normalized to November 30th). 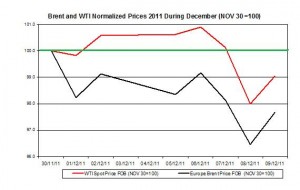 The premium of Brent oil over WTI spot oil declined during last week and reached on Friday to $9.32. During December the premium fell by 14.96%. 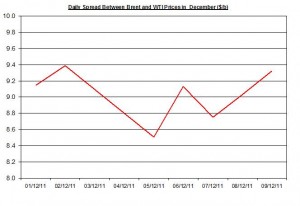 Despite the ongoing decline in the premium of Brent oil over WTI oil prices, the correlation between the daily percent changes of Brent oil and WTI also sharply rose during December after it had  sharply declined during October and November. 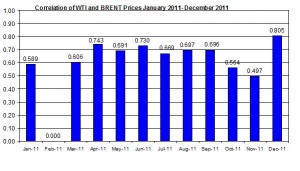 OPEC Meeting: the upcoming OPEC meeting will be held in light of the recent developments in the Middle East including the sanctions placed on Iran and the progress of Libya’s oil production; OPEC countries will decide on its future oil production quota for 2012; this meeting could have influence oil traders mainly if there will be a sharp change in the oil production quota (See here a summary of the last meeting); The meeting will be held on Wednesday, December 14th.

OPEC Monthly Report: this report will show the main changes in crude oil and natural gas’s supply and demand worldwide; the report will also analyze the development in the production of OPEC countries (mainly shed some light on Libya’s production levels) during October (See here a summary of the last November report);

IEA monthly Oil Report: this upcoming report will present an updated (as of November) outlook and analysis for the global crude oil market for 2011 and 2012 (See here a summary of the last report);

Both reports will be published on Tuesday, December 13th.

The chart below shows the development of petroleum and oil stockpiles and WTI crude oil price during 2010 and 2011. 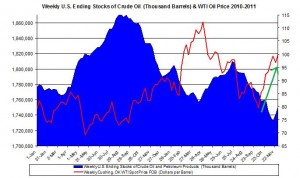 The EURO/USD exchange rate very slightly declined during last week by 0.11%; this exchange rate had a sharp drop on Thursday following the ECB press conference in which the ECB President stated his negative position on future bond purchase plans. During last week not only the Euro slightly depreciated against the USD, but also other forex exchange rates including the Australian dollar and Canadian dollar. If the U.S dollar will continue to strengthen against the Euro and AUD, this may also affect crude oil to trade down.

The S&P500 index also moderately declined during last week by 0.15% to reach 1,255 on Friday; during recent months there was a strong positive correlation between crude oil prices and S&P500 index (e.g. during December the correlation with WTI oil price was 0.834 and with Brent oil 0.584).

If the American stock markets will continue to decline as they did during last week, this downward trend might also pressure crude oil prices to fall. 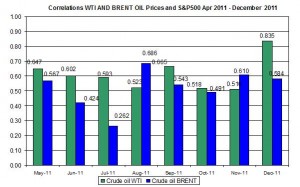 Crude oil prices didn’t do much last week and only moderately declined.  The OPEC’s meeting next week might affect crude oil prices especially if there will be some breaking news on OPEC’s oil production. From the demand side, the upcoming U.S. reports that will be published such as the US retail sales, will shed some light on the development of the U.S.’s economy and thus on the projections on its demand for oil. If the U.S. will continue to show improvement and the EU countries will also start to present growth, this could also help stabilize crude oil prices.

Finally the effects of related markets such as Forex and Stocks markets on oil market will continue to be among the prime reasons for development of crude oil prices. The upcoming FOMC meeting could affect these markets mainly if there will be another stimulus plan and in such a case could drive crude oil prices up.