The prices of gold and silver changed direction and fell after they had increased at the first couple of days of the week. After Bernanke’s testimony in the Senate, he turned to the House of Representatives yesterday. Bernanke remained about the Fed’s monetary policy even though several Congressmen questioned the effect of the Fed’s policy on the U.S economy. In other U.S news, pending home sales were up in all regions according to the recent report. New orders of durable goods declined in January by $11.8 billion or 5.2% to reach $217 billion. Capital goods and shipments of durable goods were also down. The recent quarterly report of Private New Capital Expenditure and Expected Expenditure in Australia came out (regarding Q4 2012): new capital expenditures (seasonally adjusted) were down by 1.2% compared to the previous quarter but was up by 10% compared to the same quarter in 2011. This news may positively affect the direction of the Aussie dollar. Will gold and silver change direction again today? Update: According to one report, the demand for gold is falling. Currently, the prices of gold and silver are falling. On today’s agenda: Euro Area CPI, Second U.S GDP 4Q 2012 Estimate, U.S. Jobless Claims and China Manufacturing PMI.

Here is a short outlook for precious metals for Thursday, February 28th: 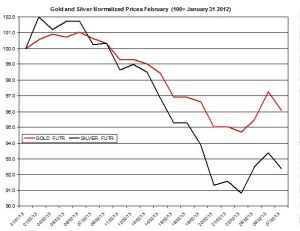 The ratio between the two precious metals inched down on Wednesday to 55.12. During the month, the ratio rose by 4% as gold slightly out-performed silver. 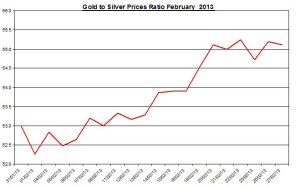 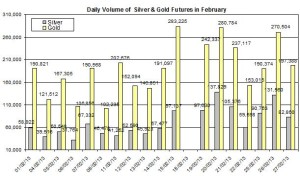 The Euro/ USD changed direction and rallied on Wednesday by 0.6% to 1.3139. During the month, the Euro/USD fell by 3.24%. Moreover, several other currencies such as the Canadian dollar and Aussie dollar also appreciated yesterday against the USD by 0.31% and 0.05%, respectively. The recent appreciation of Euro and other currencies didn’t seem to help rally precious metals. The correlations among gold, Euro and Aussie dollar continues to weaken: during January/February, the linear correlation between gold and Euro/USD reached -0.06 (daily percent changes); the linear correlation between the gold and AUD/USD dropped to 0.18 (daily percent changes). These weak correlations might suggest the recent developments in the gold and silver markets weren’t related or resulted from the changes in the foreign exchange markets.

Current Gold and Silver Rates as of February 28th

Second Estimate of U.S GDP 4Q 2012: Update: GDP rose by 0.1%. This will be the second estimate of U.S’s fourth quarter 2012 real GDP growth. In the previous estimate the U.S GDP contracted by 0.1% in the fourth quarter; in the third quarter the GDP expanded by 2.7%; in the 2Q2012 the GDP growth rate reached 1.7% (annual rate). This presents a drop in the growth rate for the US’s GDP. If there will be a sharp shift in the growth rate from first to the second Q4 estimate, this could affect not only the US dollar but also commodities prices.

Euro Area CPI: based on the recent update, the annual CPI remained unchanged at 2.2%, which is slightly higher than ECB’s target inflation; if the inflation will fall, then this could raise the odds of ECB lowering its cash rate in the near future;

U.S. Jobless Claims:  in the recent report the jobless claims rose by 20k to reach 362k; this upcoming weekly report may affect the U.S dollar and consequently precious metals markets;

China Manufacturing PMI: According the recent report regarding January 2013 the Manufacturing PMI inched down to 50.4; this means that China’s manufacturing sectors is expanding at a slightly slower pace. If this forthcoming report will present growth, it could signal an improvement in China’s economy.  If the index will rally, this may also positively affect precious metals rates.