The prices of gold and silver slightly declined along with other commodities prices such ad crude oil, stocks and the major risk currencies.  This low volatility in the precious metals prices continued yesterday but may rise in the days to come. The U.S consumer confidence report came out yesterday: the index for November slightly rose. The U.S core durable goods report was also positive: new orders for manufacturing durable goods slightly increased during October to reach $216.9 billion. These two reports showed some positive signal for the progress of the U.S economy. This news may have moderately affected the prices of precious metals. The ruling by the EU ministers of finance on Greece’s bailout didn’t lead to a rise in the Euro. Perhaps, many Euro traders had already anticipated this decision and thus it didn’t affect the Euro or related currencies and commodities. Currently, gold and silver are traded sharply down along with other commodities. On today’s agenda: Euro Area Monetary Development, U.S New Home Sales (update: home sales edged down in October), SNB Chairman Jordan’s Speech and Australia Private New Capital Expenditure.

Here is a short outlook for precious metals for Wednesday, November 28th:

As seen below, in the chart are the developments in the normalized prices of precious metals during November (normalized to 100 as of October 31st). During recent days precious metals were moderately traded up. 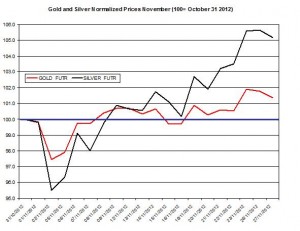 The ratio between the two precious metals slightly rose on Tuesday to 51.27. During the month the ratio declined by 3.62% as gold slightly under-performed silver. 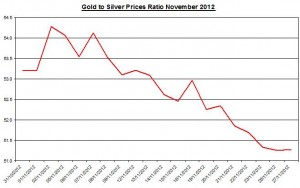 Despite the different directions gold and silver took in recent days, the linear correlation of the two precious metal daily percent changes is still robust, as indicated in the chart below. During November the linear correlation of their daily percent changes reached 0.937 – the highest this year so far, which means the two metals’ relation has tighten during the month. 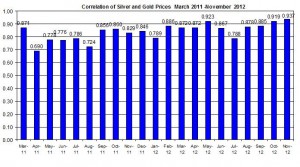 Euro Area Monetary Development (M1, M3 and private loans):. In the previous September report, the annual growth rate for M3 fell to 2.7%; M1 also declined to 5%. Finally, the annual growth rate of loans to private sector contracted again to 0.8%. This news suggests the EU economy isn’t progressing; if this trend will continue it adversely affects the Euro/USD;

U.S. New Home Sales: according to the recent report number of home sales declined in October. In the previous report, the sales of new homes rose to an annual rate of 389,000 – a 5.7% rise (month over month); if home sales will continue to rise, it may indicate a sign of recovery in the U.S housing market, which may also affect the strength of the USD and bullion prices;

SNB Chairman Jordan’s Speech: the Swiss National Bank Chairman will give a speech in a press conference; if he will announce or hint of any changes to the monetary policy of the SNB it could affect the Swiss Franc;

Australia Private New Capital Expenditure: This quarterly report presents the changes in the private new capital expenditures and expected expenditures for the third quarter of 2012. As of the previous quarter, the seasonal adjusted total of new capital expenditure rose by 3.4% (Q-o-Q) and by 27.4% compared to the previous quarter in 2011. If this upward trend continues, it may positively affect the Aussie dollar, which tends to be strongly correlated with commodities;

On Tuesday, the Euro/ USD declined by 0.22% to 1.2944. During the month, the Euro/USD slipped by 0.12%. Moreover, some currencies such as Aussie dollar slightly depreciated yesterday against the USD by 0.18%. The correlations among gold, Euro and Aussie are still strong and positive: during recent weeks, the linear correlation between gold and Euro /USD reached 0.55 (daily percent changes); the linear correlation between the gold and Aussie dollar/ USD was 0.52 (daily percent changes). Thus, if the Euro and other risk currencies will continue to trade down against the USD, they are likely to drag down gold and silver.

Current Gold and Silver Rates as of November 28th

The prices of gold and silver slightly declined along with other commodities, stock and major risk currencies. The low volatility in these markets continued and may change direction in the days to follow. The recent fall in the prices of precious metals may have been due to the fall in major financial markets. There might be some lingering effect from the recent positive news regarding the progress of the U.S economy (consumer confidence report and core durable goods). The upcoming reports regarding U.S new home sales could affect not only the USD but also bullion. If the report will present growth in the housing market it could pull down the prices of bullion.

Finally, if the Euro and other “risk currencies” will continue to trade down against the USD, then they are likely to positively affect precious metals.