Gold and silver prices started the week, unlike last week, with very sharp price changes; these changes were also felt in other financial markets such as the American stock markets. The Super-Committee in the U.S. was suppose to decide on budget cut but failed. This news may have stirred up the markets including gold and silver during the first part of the week. The U.S. durable goods report was negative and the U.S.’s GDP for the third quarter was revised down. These reports may have also pressured down commodities prices including gold and silver prices. Finally, Germany’s failure to sell all its bonds raised the concerns for the stability of Europe and for its debt crisis. According to recent reports, despite the fall in gold and silver prices Hedge funds are still bullish on gold.

Here is a short review of the changes in gold and silver prices during the week of November 21st to November 25th 2011:

During the week, the average daily percent change of gold price decreased by 0.51%; silver price also declined by an average daily rate of 1.01%.

In the chart below are the silver and gold prices that were normalized to 100 to the price at the beginning of the week – November 21st. The chart presents the development of gold and silver prices during the week.

As seen in the chart above, gold and silver prices sharply rose on Tuesday, but then corrected and declined the next day. During the second part of the week both metals’ prices didn’t change much. 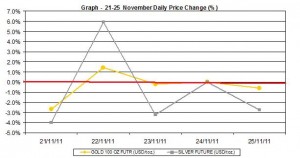 The final chart presents the daily percent changes of silver and gold prices (or in other words the price changes around the trend). It presents the sharp fluctuations of both metals during the first three days of the week were probably stem, in part, from the U.S.’s debt talks and the anticipation for the Super-Committee’s failure to make cuts in the Federal Budget. Germany’s failure to sell all its bonds didn’t help cool off the markets. But during the second part of the month as the U.S. existed to thanksgiving holiday, the bullion market cooled down and the changes in the precious metals’ prices were moderate.