Gold and silver prices slightly declined yesterday for the second consecutive day, even though other commodities prices such as crude oil prices inclined and American stock markets moderately rose on Thursday. Currently, gold and silver are traded slightly up. Today, the U.S. new home sales report will be published, the U.S. core durable goods and Canadian GDP by Industry report.

Here is a market outlook of precious metals prices for today, December 23rd: 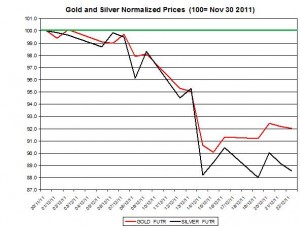 The ratio between gold and silver prices slightly rose on Thursday, December 22nd and reached 55.45. During the month the ratio gained 3.9% as gold price has outperformed silver price. 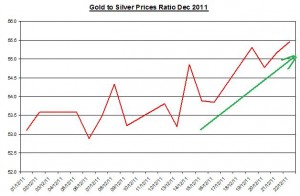 The growth rate of the real U.S GDP 2011 in the third quarter of 2011 was revised down again from 2.0% in the initial estimate to 1.8% growth rate in the recent estimate; in the previous quarter (Q2 2011) the real U.S GDP rose by only 1.3%; thus the growth rate in the Q3 2011 was moderately higher than in the previous quarter and was also the best performing quarter so far in 2011. This may have been among the factor to adversely affect gold and silver prices to slip yesterday.

Canadian GDP by Industry: In the last report regarding September, the real gross domestic product advanced by 0.2%. The monthly increase was stem in part from a gain in good and services. This report might affect the trade on the Canadian dollar currency (for the full previous report);

U.S Core Durable Goods: This monthly report will examine the changes in U.S. orders of durable goods in the manufacturing sector during November. During October 2011, manufactured durable goods decreased by $1.4 billion to $197.7 billion; Non-defense new orders for capital goods also dropped by $3.5 billion or 4.6% to $71.6 billion (for the full report);

U.S. New Home Sales: This report will present the development in the real estate market during November 2011 and change in the U.S new home sales; in the previous report (October 2011), the sales of new homes reached an annual rate of 307,000 – a 1.3% increase; if this upward trend will progress, it may further indicate a moderate increase in the U.S real estate market and may positively affect commodities prices.

The Euro to U.S Dollar changed direction again and slightly rose on Thursday by 0.03% to reach 1.3051. On the other hand, other forex exchange rates such as the Canadian dollar also appreciated against the U.S dollar. If major currencies will depreciate against the U.S. dollar, it may also affect gold and silver prices to bounce back.

The major precious metals are currently traded slightly up in the Asian markets:

Gold and silver prices moderately declined for the second straight day, and thus continued the downward trend they have had during December. The rally in other commodities prices mainly crude oil and natural gas prices, Forex markets (such as Euro and AUD) and American Stock indexes (including S&P500) didn’t coincide with yesterday’s falls of precious metals prices. If the upcoming American reports including the U.S. home sales and core durable goods will show further improvement, this may change the direction of the recent downward trend of gold and silver prices.