Libya’s turmoil continues; President of the US – Barack Obama said that the US will take steps against Libya, including economic and commercial sanctions, in an attempt to stop the bloodshed. The ongoing uncertainty in the Middle East continues to rise; this was probably one of the contributing factors causing an increase in crude oil price yesterday.

Due to recent rises from the past week, WTI spot is being traded at a high level, nearing the high prices in late 2008. During February, WTI spot price inclined by 8.3%, solely due to the inclinations during this week.

During the month of February, Brent spot price inclined by 11.6%.

As a result the spread between the Brent oil and WTI declined yesterday to 15.11$/b.

Natural gas spot price (Henry Hub) continues to fall, yesterday it declined by 0.52%, to reach 3.8$/mmbtu and thus continued its downward trend during the February. As the cold harsh condition of the winter season will subsides, we will probably see an ongoing fall in natural gas prices.

The Nymex Henry Hub future prices (March Delivery) rose yesterday by 3.35%, reaching 4.01 $/mmbtu. As a result the Contango for the Henry Hub has reached 0.21$/mmbtu – the highest level in February.

Up to date, Henry Hub spot price declined during February by 14%, and the Henry Hub future (short term) price decreased by 7.8%.

Silver prices, as gold prices, declined yesterday by 0.77% and reached 32.923$/t oz. – this is the first decline this metal had this week.

EURO/ USD declined moderately yesterday by 0.33%, the USD continued however to depreciated against the AUD, as the AUD/USD inclined by 0.87%. For a more detailed report on major currencies, check out Forex crunch.

A summary of yesterday’s Prices Changes:

The following table presents the main descriptive data from last business day – February 25th, for precious metals, energy commodities and exchange rates. The table includes: settled prices, daily percent change, and quantitative change in US dollars (except for USD/CAD, in which the change is in Canadian dollars): 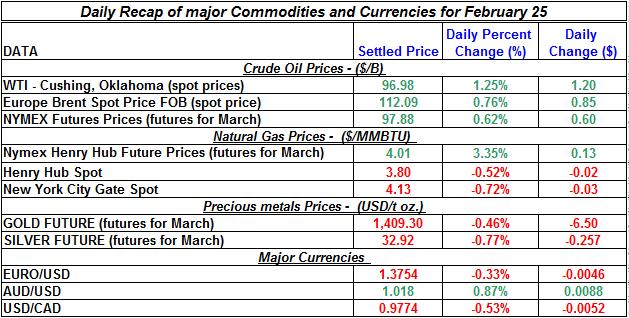