Precious metals prices shifted with an unclear trend throughout the week with an unclear trend despite the appreciation of the Euro and several “risk currencies” during last week. On the other hand the Aussie dollar declined against the UDS mainly due to RBA’s decision to lower the cash rate by 25pp. This development may have contributed to the unclear trend of precious metals. There were several reports that were published during the previous week: the U.S manufacturing PMI rose to 51.5; 114k jobs were added in September according to the recent non-farm payroll report; U.S jobless claims rose by 4k to 367k. This mixed signal regarding the progress of the U.S economy may have also contributed to the unclear trend in major commodities markets. In Europe, regarding Greece and Spain may have curbed the recent rally of the Euro. Nonetheless, during the week the Euro/USD rose by 1.41%; alternatively, the Aussie dollar fell by 1.87%. Bernanke gave a speech last weeks, and in it he assured that the Fed will keep the rates low even if the economy were to recover. The minutes of the FOMC meeting from September revealed a similar message.

Here is a short recap of the changes in Bullion between October 1st and October 5th:

Silver, even less than gold, nearly didn’t change on a weekly scale; on the other hand, the average rate increased by 1.68% to reach $34.8/t oz compared to the previous week’s average $34.22/t oz.

During the previous week, the average daily percent change of gold reached 0.08%; silver had an average of 0.00%.

As seen below, the chart presents the developments of precious metals, as their rates normalized to 100 to September 28th. Bullion prices shifted up and down throughout the week. 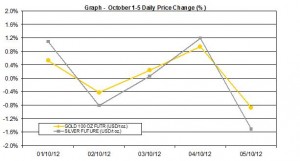