Gold and silver prices changed direction again and sharply declined along with the rest of the financial markets such as the crude oil market and the European and American stock markets. The ECB rate decision and the press conference that followed in which the ECB President Draghi stated that he opposes a bond buys program by the ECB helped push the markets down. Today, the EU Summit in Brussels will commence and the EU leaders will try and reach an agreement on the steps needed to take to ward off the current European debt crisis. Other items on the agenda today include the American Trade Balance report and Canadian Trade Balance report. Currently gold and silver are traded up.

Here is a market outlook of precious metals prices for today, December 9th: 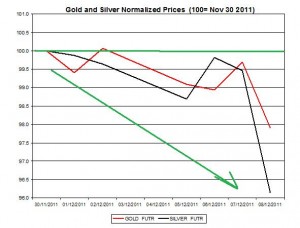 The ratio between gold and silver prices slightly rose again on Thursday, December 8th to 54.33. During the month the ratio slightly inclined by 1.8% as gold price slightly outperformed silver price. 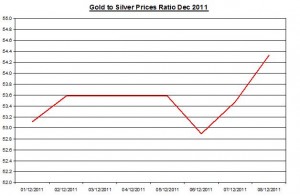 ECB Cut the Interest Rate by 0.25 but No QE for Now

Yesterday, the European Central Bank announced it will lower again its basic interest rate by 0.25 percent points from 1.25% to 1.00%. On the other hand the President of ECB, Mario Draghi made it clear that he doesn’t consider another quantitative easing plan. This announcement may have been among the reasons for the sharp fall of the Euro along with the rest of the currencies. This also affected commodities prices including gold and silver prices.

EU Summit: The European leaders will convene in the upcoming summit in an attempt to reach an agreement about the actions needed to take to keep the EU Union and fight the European debt crisis;

American Trade Balance: This monthly report for October  will show the changes in imports and exports of goods and services to and from the U.S, including major commodities such as crude oil; In the recent American trade balance report for September the goods deficit decreased by $2.0 billion; the service surplus declined by $0.2 billion; as a result, the goods and services deficit declined during the month to $43.1 billion.

Canadian Trade Balance: In the November report regarding September 2011, imports declined while exports increased during the month: exports increased by 4.2%, and imports fell by 0.3%; as a result, the trade deficit shrunk from $0.487 billion in August to a $1.2 billion surplus in September;

The Euro to U.S Dollar sharply declined yesterday by 0.52% to reach 1.3341. Other forex exchange rates such as the Australian dollar and Canadian dollar also depreciated against the US dollar; this decline was probably among the reasons for the sharp falls recorded yesterday to gold and silver prices. If the Euro and AUD will continue to decline today they may drag down gold and silver prices as well.

The major precious metals are currently traded slightly up in the U.S  markets:

Gold and silver prices sharply declined yesterday and in general the bullion prices’ performance during December isn’t great. The upcoming EU summit in Brussels that started today will probably affect the forex markets and consequently also affect gold and silver prices. If the news will be positive it may ease some of the currently high anxiety levels in the markets, but I’m skeptic that the EU summit will bring a drastic resolution that all EU countries will be on board for it. If this will be the case, the Euro might further decline and will drag down along with it the rest of the markets including the gold and silver market.